Check out the Highlights of August here

Cover Photo: Selfie with a red-figure vase from the Puglia region of Italy, 330 b.C.

The first time I really considered planning a visit to the National Archaeological Museum of Taranto (MArTA) was last year, during a Skype call with Mr. Francesco Bandarin, who is the Assistant Director-General for Culture at UNESCO.

As a millennial working in the museum field, it is hard to imagine a space that is more “essentially complete” than the MArTA, especially considered the context in which it is located: Taranto, or, better, the South of Italy, which is dense in archaeological heritage, both from the Greek and Roman civilizations.

A side view of the Ponte Girevole in Taranto, Italy

As I learned on the website, the building hosting the museum collection was erected shortly after the mid-18th century, and became home to the museum in 1887. The structure has been expanded and restored in several stages, and the latest version of the building was completed in 2007.

Room XIII at the MArTA

Entering the museum, which is not far away from the Lungomare di Taranto, the first thing that struck me was how quiet the lobby is compared to the traffic surrounding it: the MArTA is a little oasis in the heart of the city. Obviously, summers are very popular in Taranto, with its hot weather and pretty beaches, and I wonder how I would feel in the winter?!

The second thing I noticed was the politeness of the staff that greeted me. I was quickly freed of my heavy backpack (I was at the beginning of a one-week road trip) and invited to the first floor to start exploring the past. As the lady explained, the visit is supposed to start on the second floor but the museum currently follows specific opening times of the first and second floors for lack of security staff — which is not uncommon in Italy. 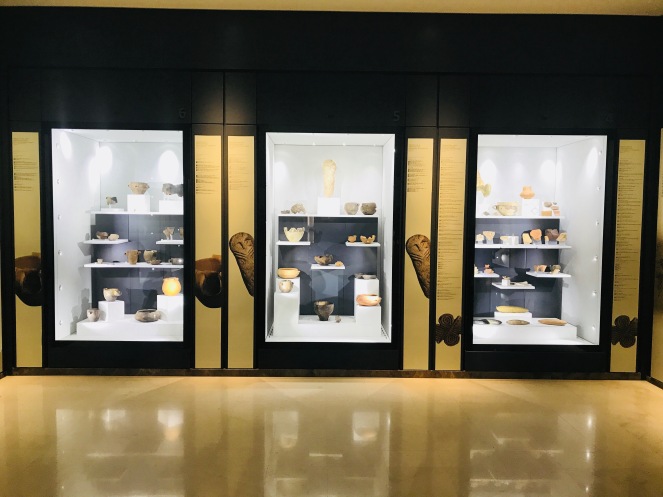 Some beautiful pieces from the Pre-history and Proto-history periods

Following the chronological order of the pieces – starting on the second floor, one finds some exceptional art from the history of Taranto and its territory: Pre-history and Proto-history, the Greek Period, the Roman Age, then the Late Antiquity and finally the Middle Age (some of my favorite pieces are in the photos below): 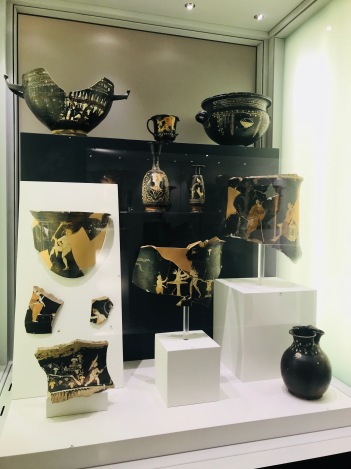 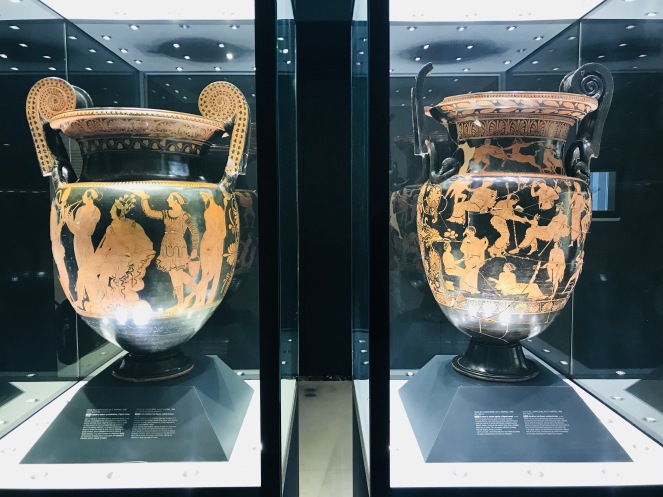 The first floor instead includes beautiful funerary monuments and tombs. There’s also a section on the very famous golds of Taranto from the Hellenistic Period (Room XI). A few rooms are devoted to the “Roman Taranto”, in which I was stunned by the furniture, statues and mosaic floors of the private and public buildings of the imperial age.

Roman mosaic from the imperial age

All in all, I loved my visit at the MArTA. The collection is stunning — as you can see from this post I especially loved the vases, some of which I had the opportunity to see a few years ago at the Getty in Los Angeles. Plus, people are friendly in Taranto and the city deserves a tour, especially in the summer! There are other museums I would like to check out next time I’m in Taranto, such as the Museo Ipogeo Spartano.

To learn more about the MArTA, please check out the website.

Thanks for visiting The Alley of Museums! I hope you will spread the museum love by subscribing via email, following the blog on Instagram and telling your friends about Musalley. Remember, enthusiasm is contagious!