Check out the Highlights of September here

Be like a fortress: lead with truth and only consciously bend.

Cover Photo: sharing a community moment at the Aragonese Castle of Taranto

One summer night, while visiting the city of Taranto, I was craving adventure: that’s when the best Heirlooms happen. So, I decided to go for a walk through the city center and, while passing by the Ponte Girevole (revolving bridge) I saw a massive stone structure that immediately caught my attention.

“What is that??” I asked the lady who was taking selfies next to me.

“That’s the Aragonese Castle of Taranto!” She promptly answered. 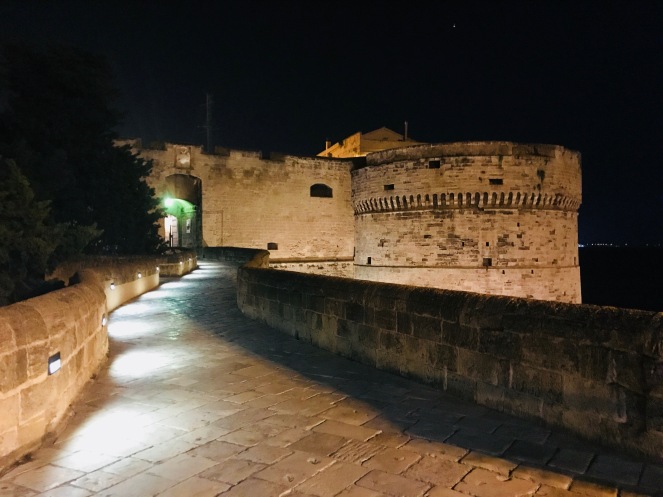 The Castle at midnight: what a lovely night by the water

Apparently, as I subsequently learned on site, the Castle is the first tourist attraction in the city. Originally named “Castel Sant’Angelo of Taranto“, the fortress has a long history, as shown by recent excavations and as I learned during the guided tour I and many others were given by an official of the Marina (Navy).

It was around midnight. The Castle is beautifully located near an ancient natural depression of the rock bank – above which stands the ancient village of the city – and is an Aragonese reconstruction of a previous Norman-Swabian-Angevin fortress.

The ancient city of Taranto: a global view

The previous Greek, Byzantine and Norman-Swabian-Angevin structures are highlighted in the guided tour. The new castle of the Aragonese period was rebuilt in the years between 1487 and 1492 by the Spanish, according to the new criteria imposed by the improvement of the artillery.

One of the corridors of the Castle

Despite the Spanish interventions, the fortress slowly lost military power and, after having played a huge role in many battles – among which the rejection of the Turkish assault in 1594 – it ended up being used as a prison and as a barrack.

Even through the changes in function, the Castle’s structure remained intact except for the tower of Sant’Angelo, which was demolished in 1883 to make room for the Ponte Girevole (revolving bridge). 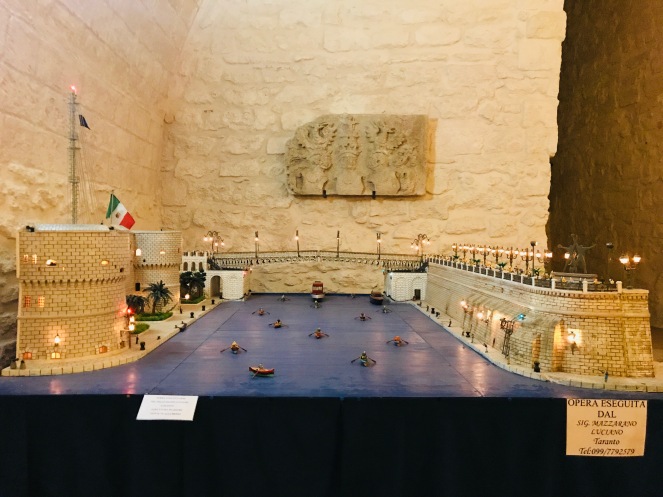 A view of the Ponte Girevole by artist Luciano Mazzarano

In 2003 the Navy (custodian of the Castle since 1883) has begun a massive restoration of the interior of the fortress with the aim of identifying the previous Greek, Byzantine, Norman and Swabian-Angevin structures.

The Castle is open to free guided tours every day, holidays included. Over the summer, a free guided tour is available every two hours, with the last tour being at 12:30am!

I just wish I could have bought something from the Castle to give back for the gentleness of the staff. Hopefully, in the next years we’ll all see a cafeteria or a souvenir shop by the exit of the Castle…

For more information on the Aragonese Castle of Taranto, please check out the website.

Thanks for visiting The Alley of Museums! I hope you will spread the museum love by subscribing via email, following the blog on Instagram and telling your friends about Musalley. Remember, enthusiasm is contagious!